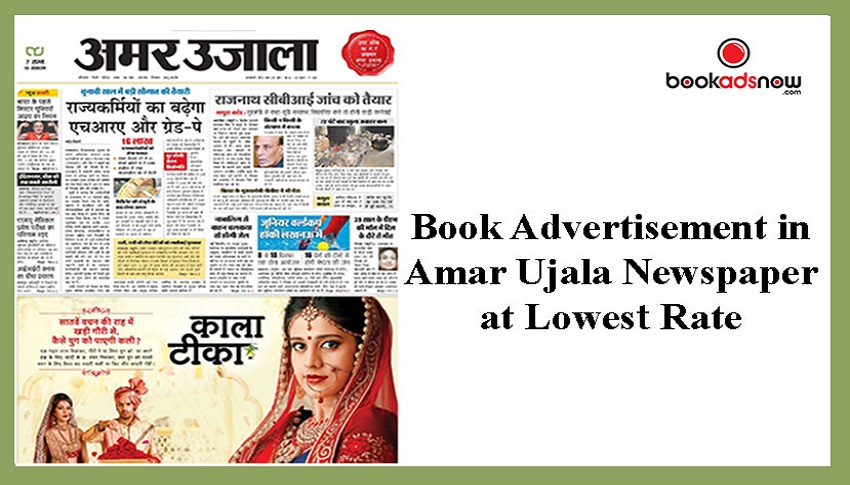 Hindi is the national language of India, the nation holds a special place for the array of Hindi publications circulated all across the country. A nation where the majority of the newspaper readers converse in Hindi, the presence of Hindi newspapers plays a vital role in creating a better engagement with the readers.

While in the past, we have discussed Hindi newspapers like Dainik Jagran and Dainik Bhaskar, today we will deal with Amar Ujala- India’s 3rd largest newspaper with a total readership of 4.65 crore readers as per latest Indian Readership Survey (IRS). The publication has 20 editions in 7 states and 1 union territory embracing 179 districts. Founded in the year 1948 in Agra, Amar Ujala in the present day has a total circulation of 27.11 lakh copies (Source: ABC July-December 2017) covering regions like Uttarakhand, Himachal Pradesh, Jammu, Haryana, Chandigarh, Punjab, Delhi NCR and Uttar Pradesh.

18-24 pages of daily catering to topics like politics, entertainment, fashion, lifestyle, finance, etc., Amar Ujala has come a long way to stand out as one of the premium Hindi publication owing to its path-breaking journalism skill.

The significance of releasing newspaper Ads in Amar Ujala?

Let us explain this to you with some numbers. As per the recent findings of Audit Bureau of Circulations (July to December 2016), Amar Ujala was ranked #1 newspaper in Uttar Pradesh and Uttarakhand with 22,57,323 copies (including 2,88,280 variant copies) and 2,62,760 copies respectively.

Furthermore, the newspaper has been experiencing a consistent growth story in the market of-

Hence, the vast popularity of Amar Ujala gives the very first reason to every advertiser (brand or individuals) to book Amar Ujala Advertisement which will fulfill the purpose of releasing the same and allow them to earn better ROI (only for the brands). Furthermore, the publication comes with a plethora of supplements catering to various issues, thereby giving yet another place to the advertisers to publish Ads which otherwise might get lost in the main issue.

However, not every advertiser can afford to publish advertisement in newspaper Amar Ujala shedding a lump-sum amount from their pocket.

Hence, what is the path to achieving a cost-effective Amar Ujala advertisement rate?

Are you acquainted with Bookadsnow? Before we delve into this newspaper advertising agency, let us tell you that Bookadsnow is the path that will lead you to achieve the best rates for the Amar Ujala advertisement in the market.

Though we have mentioned earlier that it is a newspaper ad agency, however, the brand goes way beyond a mere newspaper advertising agency. We are an online media planning, buying and releasing portal who have simplified the tiresome task of booking newspaper Ads in a few easy steps.

Our 30+ years of expertise and skill in the sphere of media has permitted us to create uncountable success stories for our clients, thereby carving the path to maintain a strong relationship with them. Moreover, the INS accreditation adds to the credibility of the brand name and highlights the brand ethos, thereby enabling the advertisers to rely on us even during an urgent situation. Furthermore, the concept of a predefined card rate does not prevail with us as we have the potential to negotiate the rates with the publications on behalf of our clients. However, the benefits of connecting with us do not end here. Get familiarized with our in-house media planning team who are a group of skilled people guiding you all through your Ad booking process.

Lastly, once your Ads get published in the newspaper, we will provide you with the copy of the same as a proof of our agreement. You can complete the payment process through various payment modes as per your convenience.

For further information catering to Amar Ujala advertisement rates, consider browsing though Bookadsnow official website or drop us a mail @ info@bookadsnow.com. Alternatively, call us @ 9830400021 and connect with our media experts who will help you in booking Ads easily and instantly.