Don't Hesitate to Release an Advertisement in Times of India 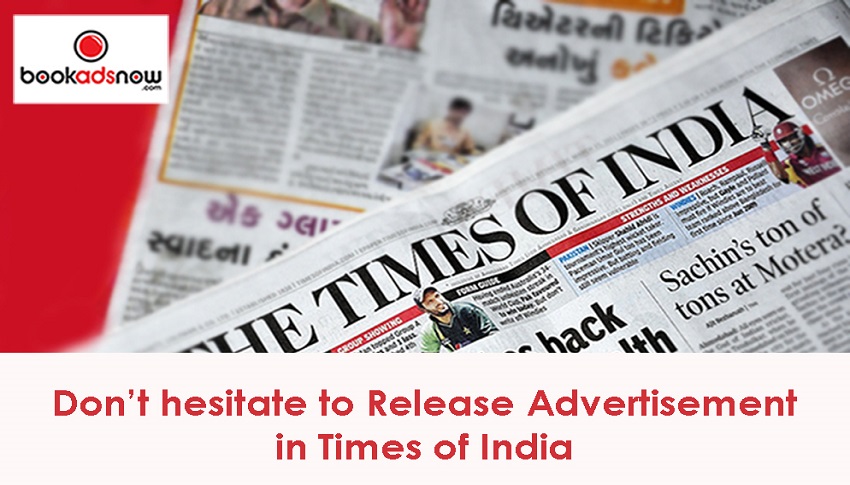 The Times of India is a name which resonates nationally for it is a daily that has been dominating the media industry since 1838. Its unmatched journalism technique has set high expectations in the Indian media industry. Under the ownership of Bennett, Coleman & Co. Ltd., this newspaper has built a loyal reader base of 7.59 million customers all across the nation; this surely gives Times of India (TOI) an edge in this industry. The publication provides information to its readers about relevant topics like the Indian politics and economy, Global news, fashion, entertainment, lifestyle, cuisine, sports, etc.

Given the unmatched popularity backed by numerous competitors in the market, publishing Times of India advertisement is a smart decision that every brand and individual must take for a successful newspaper advertisement.

Make Way for an Effective Ad with Times of India

The huge popularity of TOI as a daily makes releasing an advertisement in newspaper appropriate. The reasons outlined below should back this claim, they are as follows:

Quick Publishing: The vastness of TOI as an organization, allows them to run an Ad campaign that is relatively last minute. Its execution with perfection is enabled by their in-house experts. They coordinate endlessly with the advertising agencies like Lookad to process the immediate release of an Advertisement.

Extensive Reach: Since TOI has an extensive reach in all the major cities, the likelihood for an extensive viewership of the Times of India advertisement is relatively high. TOI is released in most prominent cities like Mumbai, Delhi, Kolkata, Chennai, Bangalore, Hyderabad, Jaipur, Goa, Surat, etc. This facilitates a healthy viewership of the advertisement in the newspaper. Additionally, the extensive reach enables brands and individual to reach out to demographics in various locations through the same day.

Different types and Format of Ads: With TOI a variety of advertisements can be released. The Ad types are as follows: Matrimonial, Property, Education, Recruitment, and Obituary among others. Apart from that, each of these advertisements can be released in any of the three broad formats namely: Classified Text Ad, Classified Display Ad and Display Ad.

Hence, those were some of the main reasons that drive brands and individuals to book newspaper ad.

However, picking the right publication for the advertisement in the newspaper is not sufficient. It is equally important to pick an agency that can help the client navigate through the process of booking newspaper Ads seamlessly.

Bookadsnow is one such online media planning portal that is introduced by Lookad India Pvt. Ltd. It allows clients to successfully release an advertisement in newspaper.

We have 30+ years of experience in the media industry and our accreditation by the Indian Newspaper Society (INS), the most prestigious organization of Press of India both add to our credibility. This has allowed us to develop a long-standing relationship with most media houses on a regional and national level. Thus, you can take advantage of the simplified process and book Times of India advertisement through Bookadsnow. We personally negotiate low media rates with TOI on behalf of our clients.

Apart from that, we have an expert in-house media planning team that works continuously to guide the clients through the Ad booking process. They try for the best Ad position on the specific page of TOI that is requested by the client. We also have an Ad creative team who will provide you with the best creative options for a successful advertisement. This not only simplifies the Ad booking process but also generates better results for the clients. Moreover, once your Ad gets published in TOI, Bookadsnow provides the client with a hard copy of the newspaper as a proof of our agreement.