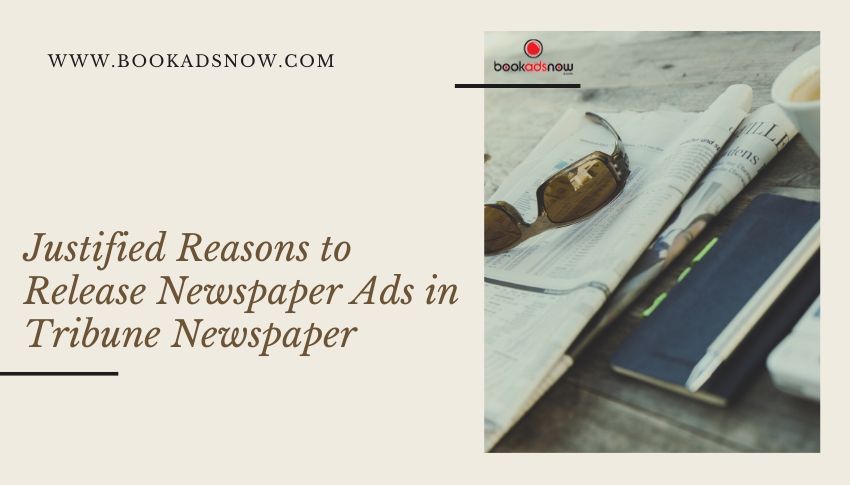 Newspapers are the open windows into the world. Offering true to life information about events and occasions, one can get a clear picture of a region’s current affairs. At the same time, newspapers talk about diverse trends and cultures, as well as updates on sports, business and trade, health and fitness, and several other avenues of interest.

Releasing a newspaper ad in top newspapers such as The Tribune is not the primary objective. Rather, the driving force behind the need of a newspaper is the presence of its journalistic content. People invested in political matters would be picky when it came to selecting a newspaper since these tend to have certain political inclinations and hence, bias. Thus, it becomes necessary to choose a publication that presents fair viewpoints and objective writing.

Newspapers such as the Tribune come highly recommended as they strive to provide accurate delineations of happenings and occurrences without resorting to sensationalism and propaganda. Being the basic foundation for good journalism, many newspapers also incorporate easy language and presentation and stand as powerful mouthpieces to reach the general masses.

If these are as important to you, The Tribune is sure to satiate your need for daily news.

The Tribune – The Perfect Way to Stay Updated

With its headquarters in Chandigarh, this newspaper came into existence in the year 1881 and was founded by Sardar Dyal Singh Majithia. Its sister publications include names such as Dainik Tribune and Punjab Tribune. For those seeking to target audiences via newspaper ads in North India, this publication becomes particularly useful, especially in places such as Amritsar and Chandigarh.

Most of its revenue comes from advertisements, pointing at the necessity for one to release an ad in Tribune. This can be seen from its quality of content that came from the expert editors-in-chief in the past, which comprises of the following personalities: Kali Nath Roy, Prem Bhatia, Hari Jai Singh, H.K. Dua, and Raj Chengappa among others.

But that’s not the only reason to release newspaper ads in The Tribune.

Are you familiar with the others?

Storehouse of information: Being a reputed English-based newspaper, one can find the latest information when it comes to sports, finance, entertainment, international and national affairs, politics, etc. One can find their need for information saturated by this well-rounded appeal.

Increased viewership: As per the IRS figures, the total readership for this newspaper was 1,490,000 in 2017 and in Q1 of 2019, it jumped to 1,647,000. A Tribune ad receives a boost in viewership as per these figures, which is a great benefit to advertisers.

Choice of editions: With the use of newspaper ads in the Tribune, one can easily reach several areas such as New Delhi, Jalandhar, Amritsar, Haryana, Bathinda, Shimla, etc. The influence of this publication is seen across various areas, especially in and around North India.

Journalistic finesse: Serving as a role model in terms of content, this newspaper is known for its responsible journalism and accuracy of events. As a source of information, the pages of this newspaper come packed with timely news and quality insight into matters.

Looking for An Easy Way to Release Your Tribune Ad?

If you are confused about releasing your notice advertisements, or any ad for that matter, Bookadsnow is the right way to go. Possessing INS accreditation with over 30 years of experience in the media industry, we have made the entire process as simple as possible for first-time ad-bookers.

Here are the simple steps that one needs to follow:

After you fill in the ad specifications and your contact details, our media experts from Bookadsnow will get in touch with you instantly.