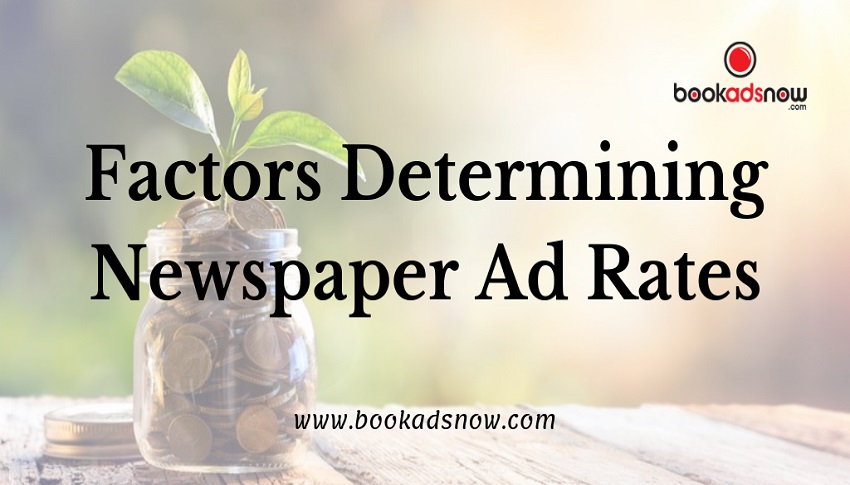 Newspaper advertising is the oldest form of print promotion. It is a reasonable and flexible option for businesses who are looking to promote their products and services to potential customers thereby churning out the true personality of their brand. Newspaper advertisements can be promoted on the national and regional level. In fact, as per Neilson, newspaper advertising in India accomplishes the highest level of engagement compared to social media or any other Ad.

However, fixing newspaper Ad rates depends upon a few mandatory factors. Hence, in this write-up, we will focus on these factors and the process of determining the newspaper advertisement rate.

The newspaper advertising rates are fixed after considering factors like the publication’s location, circulation size, the color, frequency, and day of the week your Ad is getting published. A local paper may charge Rs.120 for per sq.centimeter of a black and white Ad. Hence, from here we can say that a 4/10 sq.centimeter newspaper advertisement would cost Rs.4800. Major National papers may charge Rs.10,000 or more for the same ad.

Now, if we come up with estimated prices for Sunday advertising in black and white in different publications, the cost to advertise in color may differ greatly between newspapers. However, there should be an assumption of having to pay up to 50% more for a full-page color Ad.

Hence, what are those factors determining the price of advertisement in newspaper that will fit your small or large business marketing budget? Learn it from the upcoming section.

There is a potpourri of diverse determinants that define the price of advertisement in newspaper. Some of the most important factors are:

Size/color of the Ad: The bigger the ad the more it will cost. For example, display newspaper advertisement rates are calculated based on the height in centimeters, and width in columns. Most publications have their own standard-sized advertisement spaces in which your Ad must fit. Again, some newspapers grant non-standard sized spaces such as a 'U' shaped Ad around the edges of an open paper. However, in such cases be prepared to pay a higher price owing to irregular sizes and shapes

Another factor that extensively affects newspaper advertisement rates in the presence of color. Coloured Ads are more expensive than monochrome or black and white Ads. Some newspapers may discriminate between multi-colour advertisements and those that only have one added colour called "spot colour".

Number of Times the Ad runs: If you decide to run your Ad in the recurring system, you will have to pay more on the overall aspect but less for each individual Ad.

Day of the Week & Section of the Paper: Expect to pay the more on Saturday and most on Sunday for an advertisement in newspaper. You are also entitled to pay more to have your Ad in the main section rather than in the sports or travel section.

Left Hand Side VS Right Hand Side: This factor is also associated with the position of the Ad but relates to which side of a newspaper the Ad appears. You might be astonished to learn that in some publications an Ad that appears on the right-hand side will cost more than the one that appears on the left-hand side. It entirely depends on the way the readers actually read a newspaper, and where their attention is focused.

How to Receive Discounts on Newspaper Ad Rates?

It never hurts getting an extra dose of pampering in form of discounts on newspaper advertising rates. However, bagging this discount is a rare thing as most of the newspapers will provide you with little or no discount.

However, book newspaper ad through a newspaper Ad agency will provide you with the best newspaper advertisement rate in the market.

Bookadsnow is the clear winner in this case. Why?

We do not have any predefined card rate for newspaper Ads as we have the potential to negotiate the same with various publication houses on behalf of our clients. Hence, this attribute has enabled us to stand out in the media industry for the past 30 years in the crowded market of newspaper Ad agencies.

Furthermore, we are an online media buying, releasing and planning portal who have given a new meaning to the booking of newspaper advertisements. You can now book advertisement in newspaper online within few simple steps from your comfort zone. Our tireless work and good customer reviews have allowed us to earn the INS accreditation, thereby carving out the path to maintain a strong bond with various media houses.

Lastly, what shapes up Bookadsnow is a team of experienced employees who take the step to guide our clients through every step of booking newspaper Ads and enables them to get the best out of their newspaper advertisement at a cost-effective rate.

In case you wish to learn more about newspaper advertisement rate, get in touch with us @ 9830400021 or drop us a mail at info@bookadsnow.com.

How Rates Vary with Different types of Newspaper ads

What are the different types of Newspaper Ads?