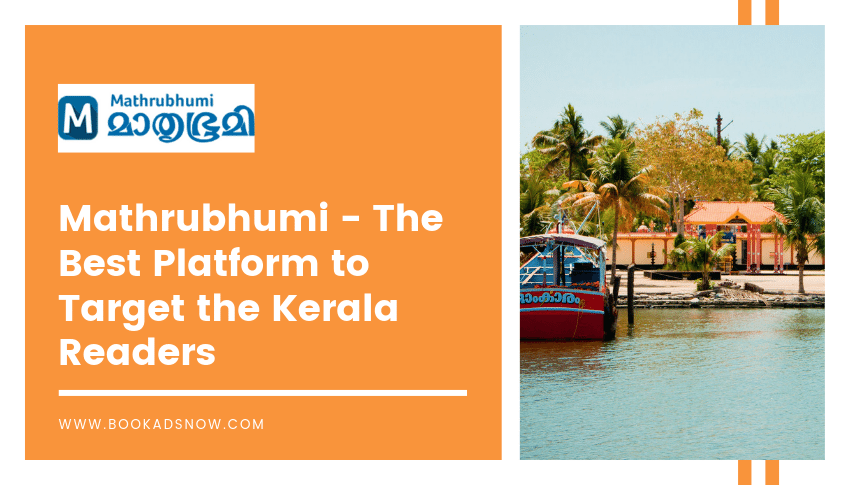 The Reasons of Choosing the Mathrubhumi Advertisement

To start with, Mathrubhumi was born on the 18th of March 1923- just the day before the first anniversary of Mahatma Gandhi's arrest for the first time by the British Raj. Hence, the newspaper played as one of the main stages when it came to highlighting India's struggle for freedom. Under the ownership of The Mathrubhumi Printing and Publishing Company Ltd, the newspaper has provided the Malayalam readers with crisp information catering to various fields, thereby making this newspaper as one of the most read regional papers.

With its HQ in Calicut, today the newspaper comes with 16 editions- 10 in Kerala and ones in New Delhi, Mumbai, Bengaluru, Chennai, Dubai, and Doha. Furthermore, the newspaper experiences an overall circulation of over 1.5 million copies, a number which prominently highlights the popularity of the newspaper. Built on strong journalistic ethics and high aesthetic outlook, at this day Mathrubhumi is recognized as one of the most popular Malayalam newspaper in the Malayalam community. Hence, overlooking the idea of releasing Mathrubhumi classifieds is a big no for the advertisers/brands/businesses. Furthermore, with Mathrubhumi ads, brands/businesses can reach the international audiences via their Doha and Dubai edition.

How to indulge in Mathrubhumi Classifieds in a simple manner?

Did you come across Bookadsnow? If that is something new to you, allow us to explain Bookadsnow. If you are looking for a simpler method to book advertisement in newspaper, Bookadsnow is the ultimate solution. We are not just a simple Ad agency but an online media planning, releasing and buying portal having a presence of 30+ years in the media sphere.

An individual or a brand can indulge in newspaper advertisement within a few simple steps online via Bookadsnow. This can be done from your comfort zone as well. Even the ones sitting abroad can book an ad in newspaper in India via Bookadsnow. A Gen-Y platform for releasing Ads, Bookadsnow will provide you with discounts on your newspaper Ad rate, thereby reducing the overall expenditure catering to releasing Ads.

Apart from being INS accredited, we are also bestowed with a proficient team of experts who guides the advertisers at every step of booking Ads. Hence, the blend of such features makes Bookadsnow the perfect platform for releasing Mathrubhumi ads.

Lastly, we do not follow the policy of displaying a predefined card rate as we have the potential to negotiate the same on behalf of our clients. This way, we keep ourselves a step ahead of the other Ad agencies in the market, thereby making sure to meet the expectation of our clients. To learn more, Contact Bookadsnow.