Book Ad in Deccan Herald to Target the Readers in Karnataka 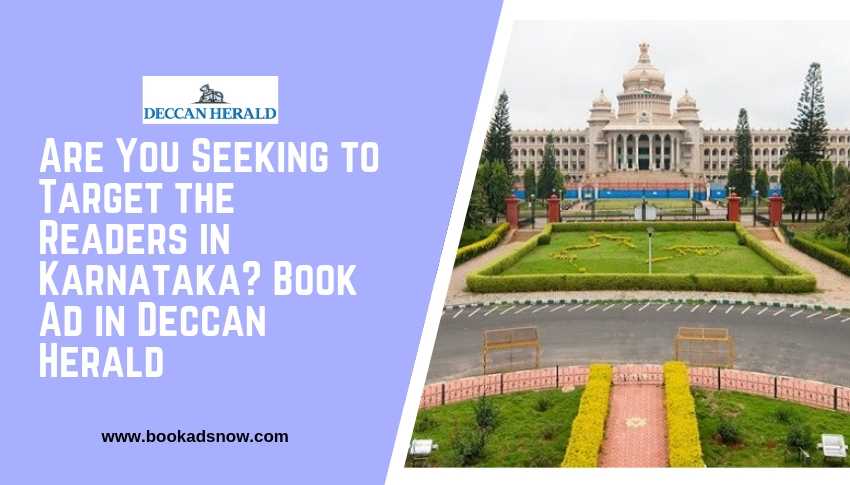 We have talked about targeting readers in West Bengal, Delhi, Punjab, Gujarat, Maharashtra, etc. in our previous blogs. However, this time, let us focus on the readers on Karnataka and the newspaper that will allow the advertisers garner the attention of readers in that region.

Tap on Deccan Herald Classifieds to Target the Readers of Karnataka

So, you have your Ad ready but confused as to which publication will fetch your maximum viewership for your advertisement in Karnataka? Trust none but Deccan Herald, especially of your targeted audience are English readers in Karnataka. But why Deccan Herald of all the newspapers.

Deccan Herald came into operation in the year 1948 under the ownership of ‘The Printer Mysore’ media house. One of the most popular media houses in Karnataka, Deccan Herald stands out to be a flagship brand of the media house. With its HQ in Bangalore, the publication suffers a circulation of 253,253 copies daily with a massive readership of 560,000. What gives the publication such a significant readership and circulation? Deccan Herald as a brand believes in exhibiting the true story to the readers by practicing impeccable journalism and taking fearless steps to find the truth. Not just that, they make sure to provide the latest news around the globe to keep the readers updates about the events around the world. With the help of 160 reporters, the newspaper is popular among the readers of Karnataka, specially Bangalore which makes Deccan Herald advertisement mandatory among the new age advertisers.

Do you know makes it hassle-free to release Deccan Herald advertisement? The presence of Bookadsnow in the sphere of media. However, what is Bookadsnow is probably your next question? The answer is right here!

Bookadsnow is not just a mere newspaper Ad agency but an online media planning, releasing and buying portal presence of 30+ years of presence in the media sphere. An individual or a brand can a book newspaper advertisement via us within a few easy steps online from their comfort zone. Even the ones staying abroad can now book a newspaper advertisement in India through us.

A proper blend of technology and tradition form of releasing newspaper Ads have given rise to Bookadsnow- a Gen-Y platform simplifying the whole process of releasing Ads at a cost-effective rate. Apart from being INS accredited, a team of proficient in-house expert completes the brand who guides the advertisers at every step of booking advertisement in newspaper.

Furthermore, our long-term presence in the industry has allowed us to manage a solid relationship with various media houses across the nation. Lastly, we do not follow the policy of exhibiting a predefined card rate as we have earned the potential to settle the Ad rates with the publication house in question. This way we are always a step ahead of other newspaper Advertising agency in Bangalore as we provide the best rates in the market. To learn more about Bookadsnow and the steps involved in booking Deccan Herald advertisement, contact Bookadsnow.