Lokmat Advertising: Is It the Right Call for Your Business? 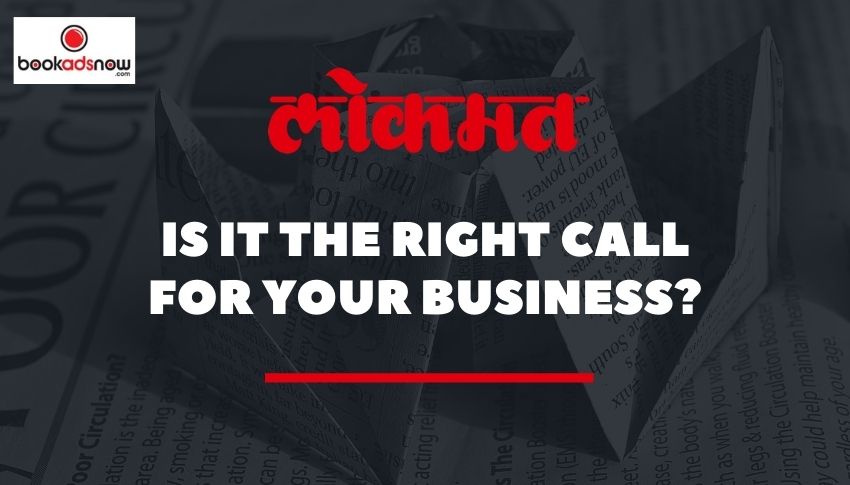 Location is everything but not just when you’re buying a new home. It’s also important since it is the actual determinant of your target audience. While there are other variables such as age and gender, the location creates a bigger pool of people that actually consume your products and services.

Advertisers are well aware of the fact that geography tends to play a crucial role in creating customized and targeted marketing campaigns. Hence, choosing the right publication to release a newspaper advertisement carries the question of location with it. Primarily, will the newspaper ad successfully reach my audience?

This is always a concern since every publication has its own set of audiences. However, there is no question when it comes to targeting the locals of Maharashtra. Assuming the role of India’s top Marathi newspaper, choosing a Lokmat advertisement will benefit your business in more ways than one.

Let’s take a look and see why.

What Makes Lokmat a Force to Reckon With As a Publication?

The Building Block of True Journalism

Founded with the intention of illuminating real issues that need attention, this newspaper plays the role of an objective mouthpiece of society. In fact, did you know that Lokmat was actually started by a group of freedom fighters as far back as 1918? Using it against the British imperialism, it had successfully reflected the voice of the nation and still continues to do so.

Audiences can be segregated on the basis of age, gender, income and other such factors. At the same time, it can also be divided via interests such as entertainment, recruitment and health among many others. The benefit of a Lokmat advertisement lies in the fact that it can also capture and engage audiences based on their diverse interests.

Not Just Limited to Marathi and Maharashtra

While the first full daily edition started in Nagpur, Maharashtra, the influence of releasing a newspaper advertisement here now transcends its original boundaries. It has about 11 editions in places such as New Delhi, Goa, Ahmednagar, Pune and Mumbai among others. As far as languages are concerned, it is available in English and Hindi as well for better results.

As per the IRS Survey of 2019, Lokmat enjoys a Total Readership of 1,96,91,000 along with an Average Issue Readership of 60,85,000. In fact, its widespread success prompted the launch of a Marathi news channel called IBN Lokmat in 2008. Also available in an e-paper format, a Lokmat advertisement boasts a strong reach backed by the necessary figures to its name.

Trust is the most important element in any business and it’s safe to say that Lokmat has won the hearts of many. Unparalleled journalism, timely yet engaging and authentic content with information catering to various disciplines all combine to make it the ideal advertising medium for a newspaper advertisement. Hence, its time you trusted Lokmat too.

Even after you choose Lokmat as the ideal advertising medium, the process is not complete until the advertisement is actually released. This is where it becomes important to choose a newspaper advertising company.

Easy ad booking process, convenient payment options and more importantly, top advertising rates – all these can be achieved with the correct choice. Just as Lokmat has a great status as a newspaper, Bookasdnow occupies a great place among countless advertisers across the country.
So get in touch today and successfully release a newspaper advertisement!