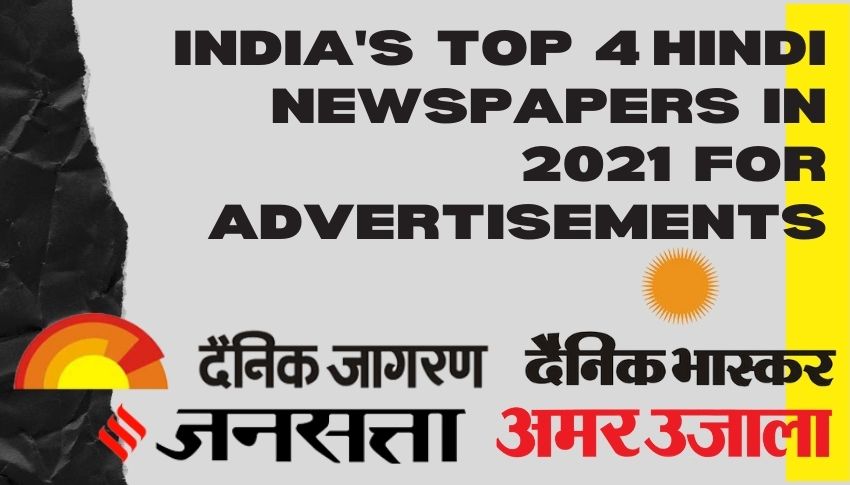 A newspaper has always been preferred for its ability to impart knowledge on a variety of fronts. Politics, business, sports, entertainment – its utility knows no bounds. Similarly, people are exposed to crucial information such as job opportunities, availability of products/ services as well as a variety of topics. That’s why advertisers rush to release a Dainik Jagran advertisement or advertise in the Times of India.

To make effective use of India’s large audience base, people choose the best newspapers which win in terms of circulation. This is because there are more than 6700 newspapers across the country today! Each carries a stamp of credibility and many are actually suited for certain types of ads. For instance, a matrimonial in Amar Ujala is mostly preferred and releasing a divorce notice advertisement in Lokmat is advisable.

But from an overall perspective, only a few newspapers are worth your attention.

Here’s a dive into the top Hindi newspapers today which are suited for advertisements.

55.7 million readers. 37 editions. 12 states. 1 name that takes India by storm – Dainik Jagran. Did you know that this newspaper was actually related to India’s freedom struggle? Incepted in the year 1942, it has proven to stand as one of the most reliable Hindi newspapers today. Its audience retention since its early years clearly showcases its undying values of truth and objectivity. That’s why a Dainik Jagran advertisement enjoys much favour and preference today.

Another popular daily, this publication boasts a readership of 4.70 million people. It has over 20 editions in 7 states with the latest in various disciplines. Ranking number 1 in Uttar Pradesh and Uttarakhand, ad types like an Amar Ujala matrimonial are known to work especially well. Furthermore, there are better targeting options when you discover some of its popular supplements include Manoranjan, Rupayan and Udaan.

If you’re looking at the largest circulated newspaper throughout India, Dainik Bhaskar is the undisputed winner. What makes it so is its mix of well-crafted content, strong presence of 65 print editions in 11 states and a readership of roughly 5,14,05,000. It originated in the year 1958 and is owned by the popular Dainik Bhaskar Group. From an early presence in Madhya Pradesh, it now easily gets your message out in the open with better viewership results in the process.

A product of the Indian Express Group, this is a younger brand that was incepted by the famed journalist Prabash Joshi. Its reputation of delivering fine news items has made it a worthy option to consider. This is best evident through distinctive commentaries and unbiased coverage of news has made it a favourite among the masses. For a Hindi newspaper today, the Jansatta newspaper will not disappoint.

Newspaper advertising has always been a part of media plans by multiple brands. However, this is due to two deciding factors. The first is the choice of the newspaper itself. These 4 newspapers on this list are definitely worth considering due to the advantages they can offer. And second, the way the ads are released themselves.

Everybody who is not a stranger to advertising knows that it can prove to be a rather expensive affair. Nonetheless, there are good newspaper advertising agencies that provide the best ad rates in contrast to a typical Sanmarg advertisement rate card. With transparency at the centre of every transaction, it has won the hearts of countless advertisers striving to make the most of their ad spends.

Get in touch with us today to learn more about how we can help you reach the top!