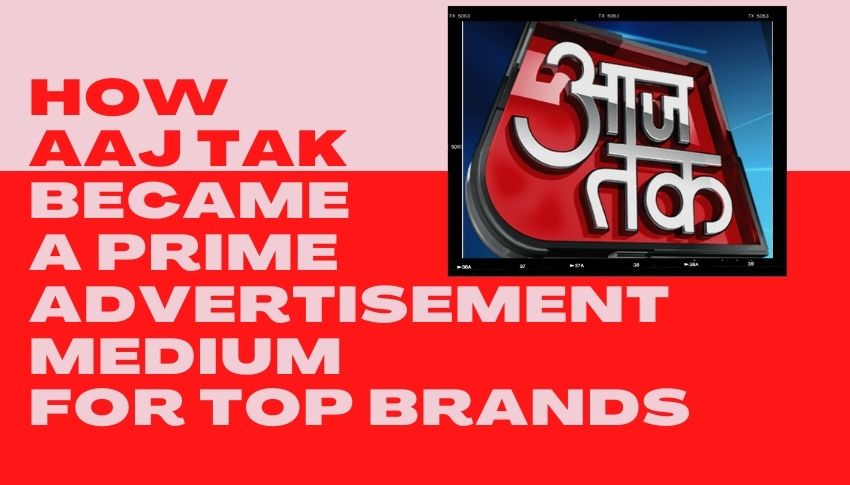 ‘Sabse Tez’. That’s one of the first things that comes to mind when you think of Aaj Tak. And quite rightly too. The channel is known to provide credible, well-crafted and unbiased news reporting that is timely and up to date. And its jump to the top perhaps took place with the same speed – about 6 months from its inception!

A Journey to Remember:

Aaj Tak had entered a market at a time when it was already dominated by top players such as Zee News and Star News. To make matter worse, news occupied less than 2% of overall TV viewership. Hence, all channels competed for that little window of opportunity. However, did you know that it took only 6 months for Aaj Tak to become the most-watched news channel in India?

Understanding exactly what was required and lacking, the expertise of TVTN (which ran the channel) shined as it already had experience in news and current affairs. This opened up avenues for growth and success right from the start – making an Aaj Tak advertisement definitely worth considering.

Being one of the country’s most reliable news sources is no easy feat. This is only because of the core values that Aaj Tak online has showcased on a regular basis. Be it the objective coverage or quality of content, all emphasis lies on what constitutes the values of true journalism.

Recognized for its journalistic and editorial excellence, it is definitely the right place for advertisers in search of strong visibility for their brands. Its status as a household name while earning the title of ‘India’s most-watched Hindi news channel’ of today makes it a strong option to consider.

Another stunning fact about Aaj Tak that you may or may not have known. Did you know that it has enjoyed the honour of being crowned the most popular Hindi news channel at the IIT Awards – 19 times out of its last 20 editions? This was only decided by over one crore votes – a true honour in itself. This throws light on the consistency in quality that Aaj Tak has maintained throughout the years and will surely continue to do so.

The First Choice for Viewers:

Most Hindi-speaking Indians switched on to Aaj Tak when the Prime Minister announced a nationwide lockdown and its subsequent extension. This resulted in roughly 13 million impressions and 12,565,000 impressions respectively. Moreover, it is the only Hindi news channel to actually register a growth during the same period – 5.52% to be precise. This itself points at the widespread preference that the channel enjoys and why an Aaj Tak advertisement stands as a superb choice for advertisers.

The Team Behind the Dream:

At the 13th Edition of ENBA 2020 (Exchange4media News Broadcasting Awards), the team behind Aaj Tak took home top honours in lieu of their superb contribution to the industry. Of course, only the best in the Indian broadcast news segment is honoured and Aaj Tak stood out from the crowd.

The News Director of the Year award (Hindi) went to Supriya Prasad while Sweta Singh bagged a special award for her outstanding efforts as an editorial leader during the pandemic. As a matter of fact, not many know that the channel actually won two awards within just a year since its inception! It’s no wonder that Aaj Tak advertising rates tend to be higher than others.

"Aaj Tak in the past few months has achieved unqualified success and has also been able to carve a distinct niche for itself in the world of news. All brands that have advertised on Aaj Tak have benefitted. Apart from providing a reach that is significant, the channel has also been able to deliver quality audiences."

Creating impressive milestones along the way, it’s safe to say that Aaj Tak has taken over India by storm! Redefining the entire genre and style of news reporting has earned the trust of countless right from the start. Coupled with this, the incredible reach of an Aaj Tak advertisement coupled with better reception and visibility makes for an ideal advertising medium. So, if it comes down to TV advertising, this channel is definitely the one to place your bet on.

And if it’s about the best Aaj Tak advertising rates, contact us at Bookadsnow today!