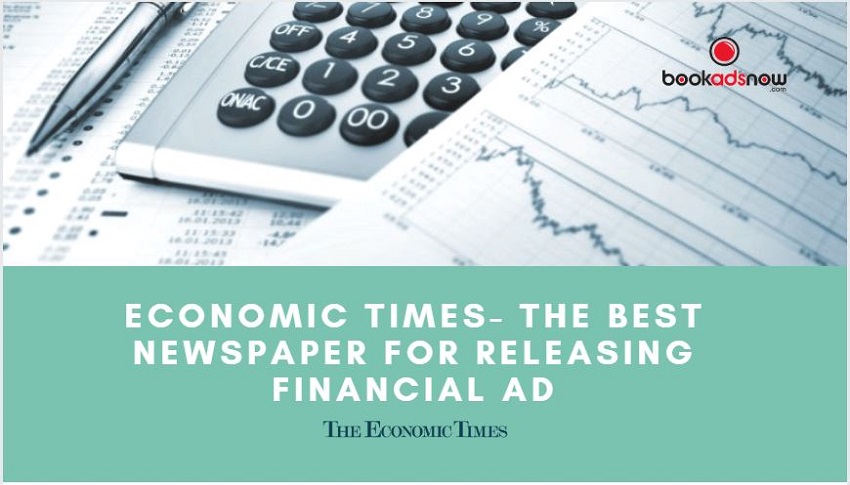 There are legitimate reasons as to why advertisers release Economic Times advertisement for experiencing a better ROI out of their newspaper advertising strategy!

Are You Wondering what are those Reasons to Choose Economic Times advertisement?

Economic Times is a brand in itself when it comes to reading an English financial daily. A flagship brand of Bennett, Coleman & Co. Ltd, the newspaper was launched as early as 1961 with the aim to provide the Indians with the right dose information catering to the financial status of the nation. Today the newspaper has expanded its base of information to international finance, share prices, prices of commodities as well as other matters related to finance. With its HQ in Mumbai, it published in the top-notch cities of the nation, namely Mumbai, Bangalore, Delhi, Chennai, Kolkata, Lucknow, Hyderabad, Jaipur, Ahmedabad, Nagpur, Chandigarh, and Pune. Not just that, in the year 2012, it was the world's second-most widely read the business newspaper after the Wall Street Journal.

Today, the newspaper experiences a total circulation of 377,789 copies daily along with a readership of 2.8 lakhs. Hence, from the given information, one can deduce that the Economic Times advertisement is unavoidable. An advertiser can expect a healthy ROI which is why they make it a point book Ads in newspaper, Economic Times.

However, let us admit it, nobody has the time to go through the tedious steps of booking newspaper advertisement. Visiting the office and meeting the respective person to book Ad in newspaper is a time taking process. However, advanced technology with a mix of the internet has provided with a simpler solution to booking newspaper advertisement. While every brand might not make the best use of this blend, Bookadsnow has mastered the art!

Bookadsnow pictures the Gen-Y Ad booking method that will produce great results for the advertisers that too at a cost-effective rate. Not just that, an advertiser will get a set of perks if he/she books ads in newspaper via Bookadsnow.

What are the Perks of Releasing Economic Times advertisement with Bookadsnow?

As an advertiser, if you are interested in releasing an Economic Times advertisement, our in-house media planning team will guide you through all the steps in the journey of booking newspaper Ad. We are an online media planning, buying and releasing portal with a presence of 30+ years in the media sphere. The synergy of the INS accreditation and its skilled in-house team helps us to produce the best Economic Times ads, thereby fostering a healthier engagement from targeted audiences. Furthermore, our long-term presence in the industry has allowed us to maintain a stable relationship with various media houses across the nation.

Lastly, Bookadsnow has done away with the policy of securing a predefined card rate as we have the skill to settle the Ad rates with the concerned publication house. This way we are always a step ahead of other Ad agencies as we provide them with the best newspaper Ad rates. To learn more about the online portal and the steps involved in booking newspaper advertisement, drop us a mail at info@bookadsnow.com or call us @9830400021.