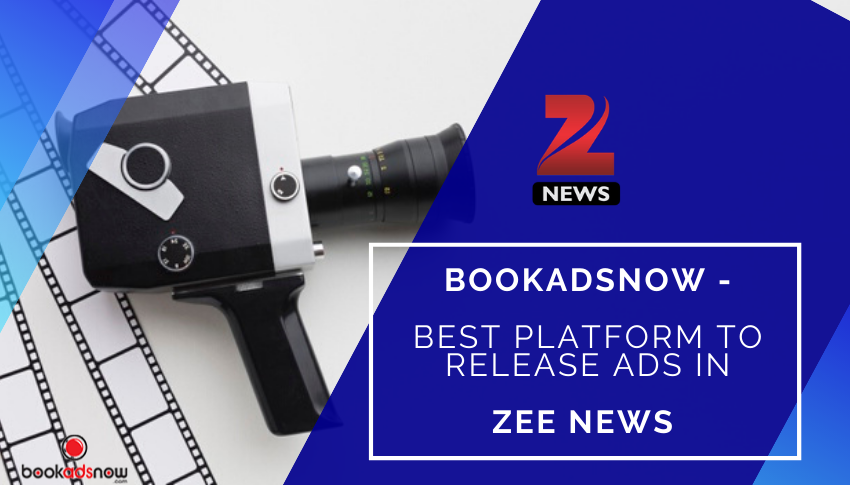 It goes without saying that Zee News channel is one of the top 5 Hindi news channels in the nation that enjoys a viewership share of 20% in the market. A renowned brand of Zee Media Corporation, the channel has managed to maintain its position even during the lockdown period.

As per the reports of BARC, Zee News Hindi channel has recorded a massive impression and reach even during the lockdown period.

Hence, advertisers, even during such difficult times trust this channel to release Zee News advertisements to reach their target audience while earning a healthy revenue.
Additionally, Zee News is one of the few channels with a Geo-Targeting option in the nation. This feature allows the advertisers to air several ads on the same channel in different regions for a bigger impact at less cost.

What can provide you a better result out of your Zee News advertisement? Hiring a television ad agency and in this regard, nothing beats Bookadsnow in this industry. Why? Here are the reasons.

Bookadsnow has been present in this industry for more than 30 years. This gives us the knowledge that will help us to meet our client’s requirements with ease within a rate that is unbeatable in the market. At Bookadsnow, we give special care to our client’s requirements. We deal with each client separately, talk to them, learn their requirements and accordingly put forward an ad rate after negotiating with the concerned TV channel. Also, being an online portal for releasing television ads, we have simplified the process down to 3 simple steps. Even during the lockdown period, when other agencies are not working, Bookadsnow is here to help you with booking TV advertisements in any channel of your choice.

As we have mentioned earlier, at Bookadsnow, we will provide you with the best TV advertisement rate in the market after negotiating the same with the concerned media house on your behalf. This is because we do not see media as a component while we believe in maintaining transparency with our clients which is lacking in this industry.

We have received the prestigious AAAI membership that adds to our brand credibility and gives us other benefits with which we'll be able to help our clients on a larger scale with releasing TV ads.

We will help you with booking ads in the prime slots, which is otherwise difficult with any top Hindi news channel. Since, at Bookadsnow, we maintain a healthy relationship with top channels across the country, we will help you in booking a slot and releasing the same as per the promised time.

We are provisioned with in-house live TV ad monitoring system, whereby, our in-house media experts will keep a track of your ad being played while providing you with real-time numbers of the same. We will also make sure that there is no duplication of the same ad in the same ad slot.

Our dedicated in-house media experts are always there to guide you through your media plan from start to finish- from helping you in choosing the right channel based on your target audience to provide you with the best ad rates.

After your ad being released and played for a certain period of time, we will provide you with a report displaying the final result of your ad campaign. You can evaluate your performance from that report and incorporate changes for your next ad campaign based on that report. Additionally, we will also provide you with detailed proof of execution from our end of our advertisement.

To know more about Bookadsnow and Zee News advertisement rates, send us a mail at info@bookadsnow.com or call us at 9830400021.