Looking for the Best Newspapers to Release Obituary Ads? Explore these Top 3 Newspapers 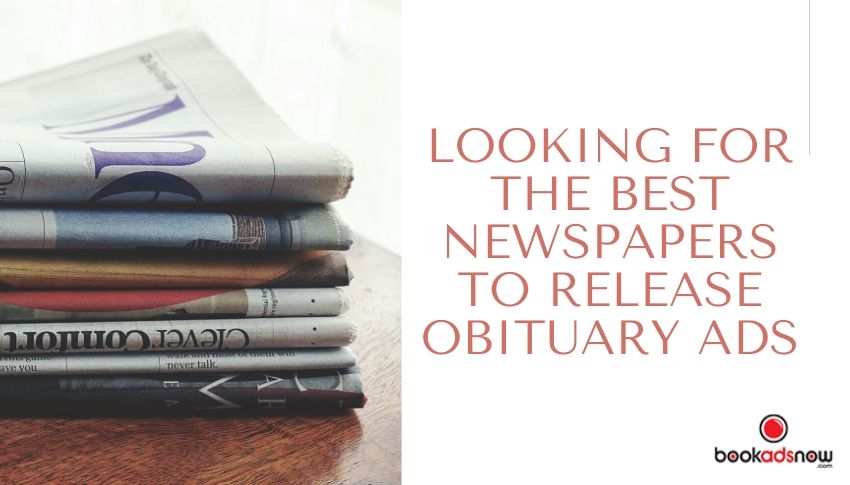 Obituary ads are published in newspapers to inform family, friends, relatives and other associates about the death news of a beloved along with details of the forthcoming funeral. A memorial advertisement is a type of an obituary ad released yearly or in six months depending on the family customs and beliefs. These are released with the purpose to commemorate the deceased.

Hence, to enable such news to reach faster to the close ones, you must choose a newspaper with a wide readership and circulation number along with many editions. It is because during such difficult times, it is impossible to call everyone and inform them the same. Hence, in this write-up, we will guide you in choosing the right newspaper by providing with top 3 publications in the industry that are apt for releasing obituary ads.

Do You Know these are the Best Newspapers to Release Obituary Ads?

India is a land of newspapers in various languages. Hence, it is quite natural to get confused and lost while planning to choose the right newspaper. However, once you have narrowed down to a few options, you’ll be able to compare one with others and finally choose the best for yourself.

We think you saw this coming. The Times of India or TOI as we say, is one of the best English dailies in the nation. Every 4 out of 5 families in the nation will claim to read this newspaper. One of the oldest newspapers in the nation, TOI was established in 1838 under the ownership of Bennett, Coleman & Co. Ltd. Since its inception, the publication has put forward an unmatched performance in the media industry owing to its out of the box journalistic skills. Owing to its popularity on a larger scale, advertisers choose to release Times of India advertisements to reach target audiences and earn better ROI.

Readership: 7.6 million
Distributed over 500 cities in India which makes it an apt platform to release Times of India obituary ads.

Hindustan Times is one of the best English newspapers in the nation. Since the beginning of 2019, the newspaper has been enjoying a huge readership base in different parts of the nation. An English daily witnessing the Indian Independence Movement, Hindustan Times was established in 1924. Operating under the HT Media LTD, the newspaper has worked hard to secure the second position in the Indian media sphere. With the objective to bring the readers with the news without any modification or adulteration, HT deserves this place in the media sphere. Hence, it is one of the favourites for the brands and the businesses to release Hindustan Times advertisement.

Readership: 36.1 lakhs
Top English daily in Punjab with 352,000 readers. In Mumbai, Hindustan Times enjoys a readership of 859,000. Stands out as the top newspaper for the 18th time in a row in Delhi and NCR with 1.7 million readers.

You were probably not expecting this name, right? The Indian Express is a hidden gem in the Indian media sphere. Established in the year 1935 under The Indian Express Group, the publication emphasises in providing the readers with the quality news each day. The newspaper only believes in providing the truth overlooking fear and other hindrances. It is an English daily that deals with genres such as politics, current affairs, fashion, entertainment, lifestyle, food, finance, etc. to provide the reader with a complete set of information. Therefore, advertisers can release an Indian Express advertisement of various nature to reach their target.

Why Bookadsnow Recommends The Indian Express for Obituary Ad?

Circulation: Experiences a wide circulation, reaching over 19 million people across the nation.

You Know what is the Best Part?

Bookadsnow works very closely with these publications and has a healthy relationship with these media houses for over 30+ years. Hence, we assure you to provide the best ad rate in the market along with creative assistance and excellent ad position.