Benefits of Booking Ads in Hindu Newspaper Via Bookadsnow 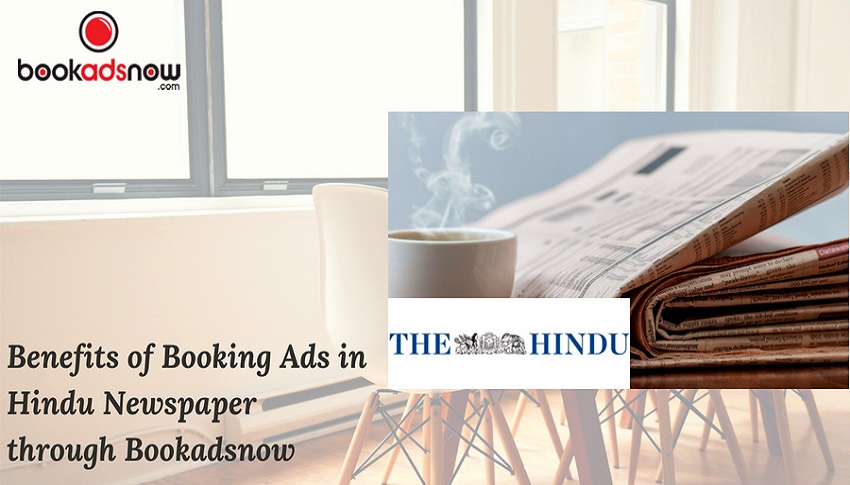 The Hindu is a legacy that has prevailed in the sphere of media since 1878. Then it operated as a weekly and it was only in 1889 that it transitioned into a daily. Despite the passage more than a century since their operation, the quality of their journalism continues to be unwavering. Currently, The Hindu has a circulation of 15,58,379 copies per day and a readership of approximately 22.58 lakhs in the nation. The strength of their circulation is especially heightened throughout South India. They are headquartered of Chennai and have printing stations in locations like Coimbatore, Bangalore, Hyderabad, Madurai, Noida, Visakhapatnam, Thiruvananthapuram, Kochi, Vijayawada, Mangalore, Tiruchirappalli, Kolkata, Hubli, Mohali, Allahabad, and Kozhikode. Its continued long-standing presence justifies their popularity. Brands and individuals who are seeking to benefit from the increased visibility prefer a daily like The Hindu that has an extensive presence. Given this background, it is important to shed some light on factors that make The Hindu Advertisement a popular option.

Benefits of Publishing the Hindu Advertisement

Widespread Circulation: What are the advantages of releasing Ads in a newspaper with an unmatched circulation? A newspaper with an extensive circulation will allow the clients Ad to receive a healthy viewership and build an important brand name for the product in question with each viewership. With its extensive circulation, the same publication is able to reach out to readers in distinct locations. For example, a business can release an appointment Ad in the edition of The Hindu Advertisement that is circulated in Bangalore. This will specifically reach out to residents of Bangalore who are looking for an employment opportunity for a vacancy.

Each of these Ads can be released in either of the 3 formats mentioned below:

Various Supplements: The Hindu is one such newspaper that is accompanied by an array of supplements. Supplements dedicate a specific number of pages to broad topics like Fashion, Food, Politics etc. Individuals or brands whose advertisement aligns with the formerly mentioned broad themes can choose to advertise here. These supplements have filtered readers; They comprise of readers who are deeply interested in the umbrella category. Other than that, advertisers who are afraid that their advertisement will not stand out in the main issue can also opt for supplements.

Stated below is a list of the patterns in which the supplements accompany the main issue:

These reasons justify why The Hindu is a preferred publication for all those who wish to advertise. However, for those who wish to release The Hindu Advertisement, the task at hand is not finished by narrowing down the options in which the advertisement ought to be released. It is also essential for an organization to approach an experienced newspaper Ad agency like Bookadsnow to help the client with the step-by-step process of releasing a recruitment Ad in The Hindu. We strive to provide our clients with a convenient Ad booking experience.

Book the Hindu Advertisement through Bookadsnow

Bookadsnow an online media planning portal simplifies the process of releasing newspaper Ads in publications that operate in India. Our experience in the sphere of media industry over the past 3 decades, has helped us earn an accreditation from the Indian Newspaper Society (INS). It is the most prestigious and central organization of the Press of India. These factors enable Bookadsnow to continue maintaining a long-standing strong relationship with most publications in the nation. Additionally, our trained media experts are all equipped to answer all the queries of the client. They help the client with the creative layout of the advertisement, they keep in mind their budget and personally negotiate the lowest Ad rates. For those individuals who are new to the process of releasing an advertisement and need help with its content, our experts provide them with templates. Furthermore, after the advertisement is released, we provide our clients with a hard copy of the newspaper and email a link to the e-paper.