Why Select The New Indian Express for Education Ads 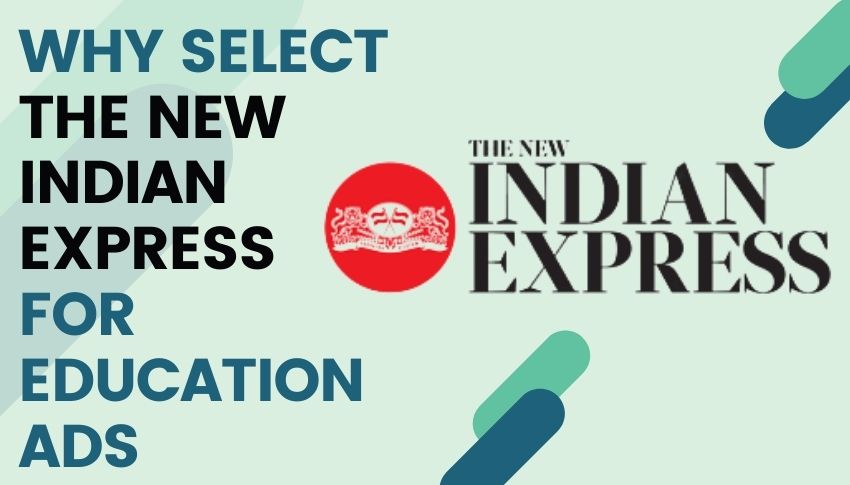 The need for education in today’s world is more important than we realize. Education is the backbone of society itself and there can be no compromise on it. That’s why parents are always striving to give their children nothing but the best. Even as schools and colleges are temporarily closed, technology has opened new possibilities of reach that makes it easier for students to learn from home. And now you can actually get a degree within the comforts of your home!

But there is only one problem.

How do you get the message of the course out to the public?

That’s precisely why we need an educational advertisement in a newspaper today. These types of ads are aimed at helping people to stay updated with the offerings by educational institutions. Keep in mind that they are not only limited to schools and colleges. They also extend to institutes with distance learning, various courses and other programmes. With these ads, you will come across information such as:

Even while they are relevant to society, not many will be aware of what your institution has to offer. Hence, it is wise to release an education ad in a good newspaper so that it gets the best amount of attention possible. And what better platform to select than The New Indian Express!

Here’s what makes it the best way to reach the public.

Get the Best of Benefits When Choosing The New Indian Express

Newspaper ads have always been the first choice when it comes to spreading important announcements. Even for legal purposes, it is preferred to release information in one regional daily and one national daily as evidence. If it’s a question of education, you can expect The New Indian Express advertisements to generate the response you seek.

Here’s what you should know about this publication.

The Indian Express and The New Indian Express were one and the same. That is, until family politics forced a split and created the two. This took place 8 years after the founder, Ramnath Goenka, passed away in 1991. The latter now has its headquarters in Mumbai while the former is based in Madurai. Today, the New Indian Express has a strong foothold in South and South-East India.

This newspaper is synonymous with good content and timely information, which in turn has made it popular among the masses. Now, any New Indian Express advertisement enjoys a total readership of 1846000 (IRS 2019), which was held at 1507000 back in 2017. At the same time, the publication also benefits from an average issue readership of 432000. These numbers are sure to make you trust this publication.

This English daily brings the latest in news and current affairs to its readers. Alongside its ability to update people with time-sensitive issues, the New Indian Express is best known for its objective reporting and expressive opinion. Its undisputed credibility and well-crafted content has made it a successful name today and is more than suitable for an educational advertisement in newspaper.

Newspapers have always been seen as tools to reach audiences in multiple destinations. When you choose The New Indian Express, you have the advantage of selecting 22 centres. From major cities like Tamil Nadu to Andhra Pradesh, reaching target groups become a relatively simple affair. It gets even better when you browse through its variety of supplements!

This newspaper is all about people. And there is evidence to back it up. Its dedication to public sentiment is best seen from the fact that it recently stood against the coverage of IPL 2021. Prioritizing the ‘life and death issues’ of the pandemic, it has decided to suspend its coverage of the much-anticipated game. In doing so, it has stated that the issue lies with the ‘timing’ and not the game itself. This comes across as a strong gesture in troubling times such as these.

Additionally, this newspaper is preferred across all age groups and hence, your educational advertisements in the newspaper are sure to get a better response. This is also enhanced by the fact that its supplements like Education Express aim to reach niche audiences with ease. Published on Mondays, it displays education-related news on a variety of institutions.

So there’s no question about the wide range of benefits you can receive with this prime English newspaper. Make your education ads even better with Bookadsnow and enjoy the best The New Indian Express advertisement tariffs. Get in touch to learn more about how you can make the most of your advertising ventures.