Discover the Simplest Method to Release Newspaper Ads in The Sentinel 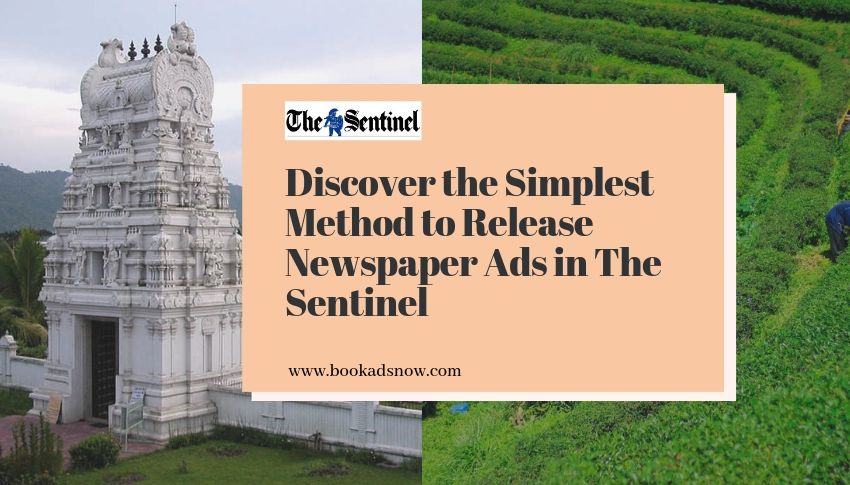 Releasing a newspaper advertisement is a tedious task. Though the results can be pretty awesome, the process of executing the same is believed to be time taking. Owing to this reason, a plethora of brands/businesses overlook this strategy, in spite of knowing that it has some major perks. Hence, to sort this issue, Bookadsnow was established. What is Bookadsnow? We shall get back to this question in some time. Before that, let us see why did we mention The Sentinel as the hero of the blog.

Let us go crisp yet full of information in this section! The Sentinel is an English daily in Assam and is considered to be one of the top newspapers in this region. In fact, it is the second best English daily in Assam which was established in 1983 under the ownership of Omega Printers and Publishers Pvt Ltd. With its HQ in Assam, the publication comes with 5 editions published from Guwahati, Silchar, Dibrugarh, Itanagar and Shillong.

The Sentinel is mainly focussed on news content catering to the regions of Assam, Meghalaya, Arunachal Pradesh, Tripura, Manipur, Mizoram, Nagaland, and Sikkim. With the objective to provide the readers of North-East India with latest news updates, The Sentinel owing to its exceptional journalism skills and hard-working team has always stood out to be a top English daily in north-East. Furthermore, to take things up-a-notch, it experiences a widespread circulation of 150,000 copies daily which is why indulging in the Sentinel advertising is a smart move.

It is beneficial for the advertisers to indulge in the Sentinel advertising when they want to target the readers of North East India. Being a popular publication of this region, it is quite obvious that coming up with an impeccable Sentinel advertising strategy will enable your brand name to reach the readers of North Eastern India. With that being said, how will you release a newspaper advertisement in the Sentinel Newspaper quickly to get faster results? Let us go back to the question that we have left unanswered at the beginning of the write-up.

A revolutionary platform for releasing newspaper Ads, Bookadsnow has added an edge to the concept of releasing newspaper advertisements by simplifying the process. To be precise, Bookadsnow is an online planning, buying and releasing portal where we have mixed traditional Ad platforms with digital factors to make the process of releasing Ad simple. One can indulge in the Sentinel advertising via us from anywhere around the globe and get the best results out of the Ad strategy.

How We Help You Boost the ROI with Sentinel Advertising?

1) We have gained 30+ years of experience which leaves us packed with knowledge about the advertisement world along with the tips and tricks that will boost the ROI from your Sentinel advertising strategy.

2) We are INS accredited which adds to the brand credibility.

3) Owing to a series of great work in the past and present, we maintain a strong relationship with the media houses across the nation.

4) Bookadsnow is complete owing to the presence of skilled in-house media team who will guide you at every step of releasing the Sentinel advertisement. Not just that, we will suggest you the best Ad placement along with providing you with readymade Ad templates that will help in garnering a better viewership, thereby enhancing the ROI.

6) Through Booked snow, you can book an Ad even in the eleventh hour and we have made the payment process simple and safe.