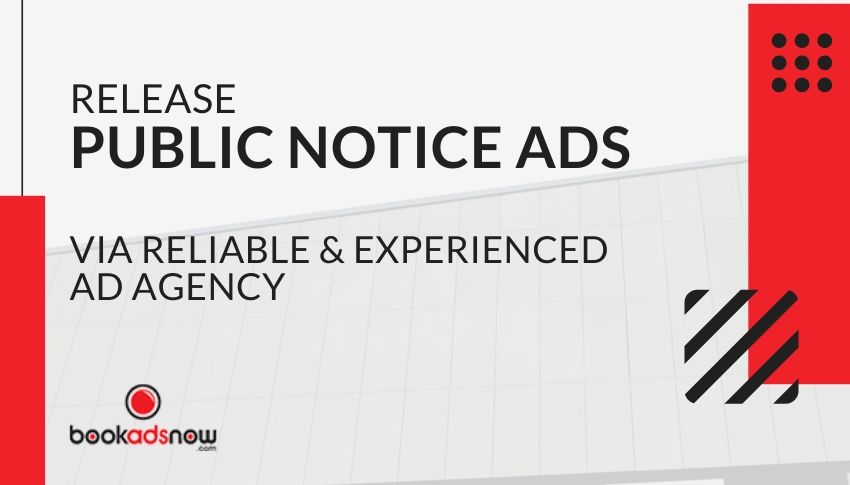 Public notice ads are different from other conventional ads that we see in the newspapers. To begin with, a public notice represents an essential part of the legal process of a company. It is a usual practice whereby companies notify the citizens of any ongoing or completed legal development that is often considered valuable or significant. When it comes to legal proceedings catering to general public awareness, it is mostly conveyed through putting out advertisements in the newspapers.

Who can Release Public Notice Advertisement?

Ideally, a public notice advertisement in newspaper can be released by the government or a business enterprise or even by an individual catering to any legal proceedings.

An UFR and AFR is released in the newspaper to assess the activities of an organization to understand the final outcome. It is imperative to release an AFR or UFR in a newspaper to stockholders and other interested people about the company's activities and financial performance.

An AGM notice is released in the newspaper to notify the interested shareholders of a company about the mandatory yearly gathering to analyze a company’s performance and strategy.

An IEPF notice is released in the newspapers to specify the provisions catering to the transfer of all shares with unpaid or unclaimed dividends for 7 consecutive years or more in the name of the Investor Education and Protection Fund Authority.

A notice for a board meeting is defined as the document that is sent to all the directors of the company specifying the venue, date, time, and agenda of the meeting.

Which are the Best Newspapers to Release Notice Ad?

●    We have 30+ years of experience which gives us complete knowledge about releasing different types of public notice ads seamlessly.

●    Bookadsnow is an online platform through which you can UFR or AFR in a newspaper or any other form of notice and from your comfort zone within a few simple steps.

●    We are reliable and experienced enough to fulfil our promise of 'Ontime Ad Released' backed by guaranteed best ad rates in the market.

●    Bookadsnow is an INS accredited ad agency and has received the prestigious membership of AAAI.

●    Our in-house media team will help you at every step of releasing any type of  notice advertisements.

●    We have a readymade Ad template/ layout which is beneficial for the first time Ad-bookers.

For more information about releasing such notice advertisements, drop us a mail at info@bookadsnow.com or call us @ 9830400021.