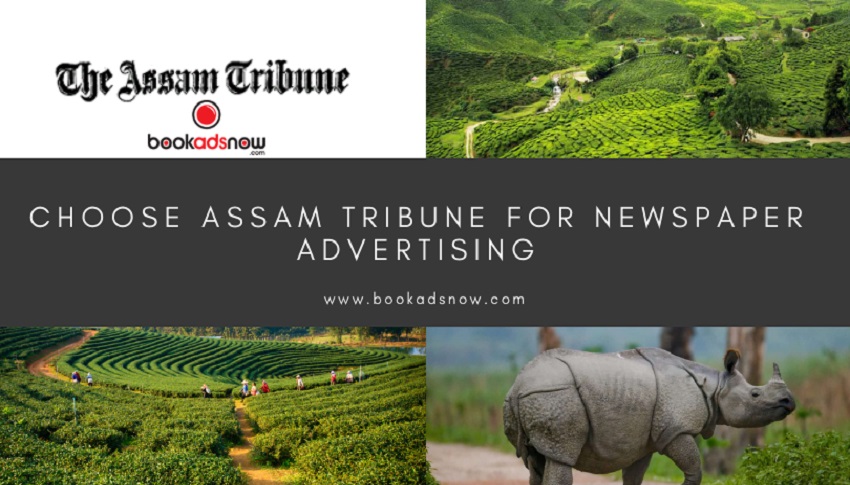 India with its plethora of languages is in a unique position as its citizens often speak, read, and write in more than one language. With so many languages, we also have an abundance of print publications which give their readers the daily connection with the language of their choice every day. As a country, we also need a common language which is why we have two official languages - Hindi and English. English newspapers are a common feature gracing the tables in the morning. Many choose to subscribe to more than one publication - one in their regional language and one in English. Each region has their collection of regional language newspapers and English language newspaper which makes targeting certain demographic groups easier via newspaper ads.

The Assam Tribune is one of the most beloved newspapers of North-East India. With their first paper having been published on the 4th of August in 1939, Assam Tribune began circulating in Dibrugarh and Guwahati. Radha Govinda Baruah, the founder, and owner of the paper used to drive around the city in his car promoting circulation and gathering advertisements which went a long way in helping the new publication to stand on stronger self-reliant legs.

The Assam Tribune advertisement is a popular choice because of its many advantages:

Booking an Assam Tribune advertisement is a great move for all advertisers whose target audience lie in the north-eastern region. However, the advertising rates of newspaper Ads often give businesses and individual a pause before they go ahead with their newspaper advertisement. The solution to this answer would be to employ an advertising agency capable of negotiating the prices on your behalf.

Bookadsnow is one of the best agencies when it comes to negotiating newspaper advertising rates:

Information about the different publications or media houses they have worked with is displayed online on their website www.bookadsnow.com where you can also find other pages which will further help you place your ad. They have also digitized the entire process which allows you to book your Assam Tribune advertisement online with ease. The choice of speaking to their in-house experts is also present, all you have to do is call @ 9830400021.