Place your Ad in the Deccan Chronicle with Bookadsnow 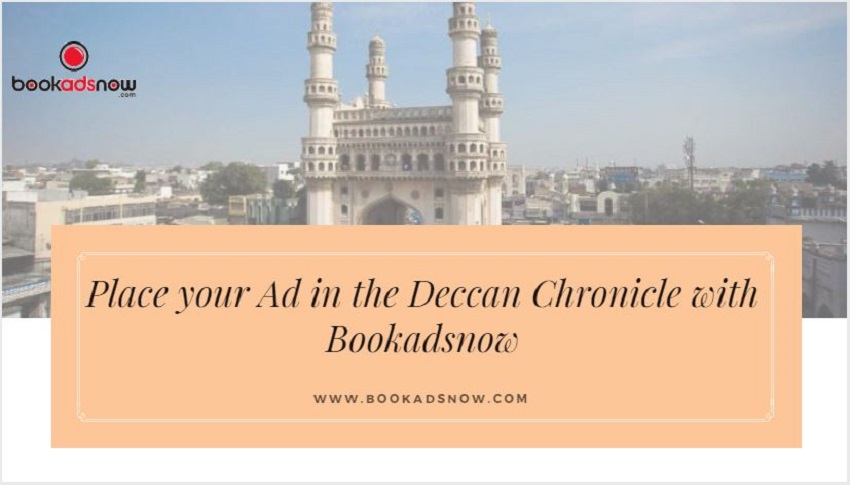 Deccan Chronicle is well-known for its exemplary writing and journalistic skill. Founded in 1938, the Deccan Chronicle has built a reputation for being one of the most well rounded journalistic houses in the country as it covers a vast array of subjects and does so with intuitive insight and knowledge. It is owned by the Deccan Chronicle Holdings Limited (DCHL) and is the largest circulated English daily in South India. Published from Hyderabad in the state of Telangana, it has amassed a network loyal readers in their 80 years of publication.

The Deccan Chronicle is also published from the states of Andhra Pradesh, Tamil Nadu, Karnataka, and Kerala. It publishes 8 editions in Andhra Pradesh and Telangana. These editions can be found in Vijayawada, Hyderabad, Rajahmundry, Anantapur, Visakhapatnam, Karimnagar, Nellore and Coimbatore. It also has a steadfast following in Chennai, Bengaluru, and Kochi.

The growing readership and popularity are encouraging more and more business to invest in the newspaper’s growing reach. Even with the growing relevance of the digital medium, many use traditional mediums as they are a known entity compared to the digital as it is continuously evolving and is therefore always in flux. Ads in newspapers have already proven to be efficient when reaching out to audiences and are great returns on investment, which is why the Deccan Chronicle advertisement is a good choice for advertisers.

The advantages of placing a Deccan Chronicle advertisement are

Bookadsnow is an online media buying, planning, and selling portal. With more than 30 years in the media industry, Bookadsnow has built connections with media houses all over the country, which gives them an edge when it comes to negotiating prices on their customer’s behalf. Armed with their INS accreditation and their sterling reputation in the industry, Bookadsnow is capable of placing an advertisement in newspaper of your choice. With their in-house media team and knowledgeable expertise, Bookadsnow is able to fulfill all the needs of their clients and answer all their doubts with a clarity that comes from years in the industry. They are easily reachable via their online site where you can place an ad through a streamlined and simplified process. You could call them at 9830400021.