Why Should you Book Obituary Ads in The Hindu Newspaper 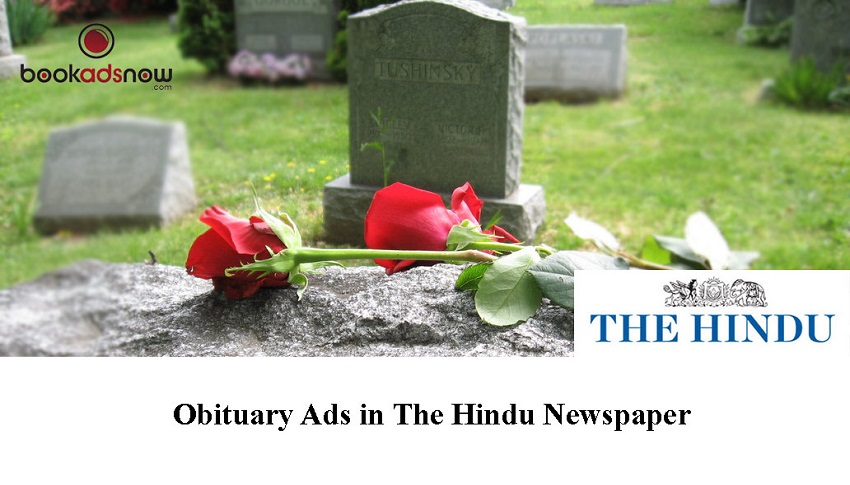 Delve into the perks of releasing obituary advertisement in the Hindu newspaper with this write-up where we are in the mood to highlight positives of the same.

Even though India is a land of uncountable newspapers, why did we choose to focus on the Hindu newspaper?

The Hindu is not just a mere publication, it is a legacy which started in the year 1878 as a weekly and gradually became a daily by 1889. Since then, this newspaper did not desist from portraying a remarkable performance in the print media owing to the unparalleled essence of journalism. Today, it is the most widely circulated English daily in Southern India with its HQ in Chennai (Madras). It has printing centers in Coimbatore, Bangalore, Hyderabad, Madurai, Noida, Visakhapatnam, Thiruvananthapuram, Kochi, Vijayawada, Mangalore, Tiruchirappalli, Kolkata, Hubli, Mohali, Allahabad, and Kozhikode. These printing centers coordinate with each other to provide the major cities as well as the small towns of the nation with a reliable and balanced presentation of news.

Thus, the popularity of the newspaper gives the primary reason to book obituary ads in the newspaper by the individuals so that the death news of a close one reaches your near ones in a short span of time.

But, what are Obituary Ads?

Obituary Ads are released to state about the recent death of a person along with the information catering to the deceased with an upcoming funeral date. Such ads are generally released with the death of a significant person or when an individual finds it difficult to reach his/her close ones to deliver the news.  Hence, in such a situation the Hindu Obituary ads play a major role for the individuals in need.

Why tap on the Hindu Newspaper for releasing Obituary Ads?

Unmatched Circulation: Today, the Hindu experiences a circulation of 15,58,379 copies per day along with a readership of 22.58 lakhs in the nation. Given this, it is reasonable to raise a question about the significance of releasing the Hindu obituary Ad. Precisely, a newspaper with such an extensive circulation will allow your Ad to receive a healthy viewership, thereby fulfilling the purpose of releasing obituary ads in the Hindu newspaper.

On a general note, obituary Ads are expensive compared to other types of advertisement. Furthermore, releasing Ads in the top newspapers might double up the expense involved in releasing an obituary Ad. However, with the Hindu obituary Ad, the scenario is a tad different. The prices of the obituary Ad in this publication is marginally steep when compared to newspapers of the same standard which yet again proves to be worthwhile for the individuals.

Why is Bookadsnow the Best in the Market for Obituary ads?

Bookadsnow is an online media planning portal with 30+ years of presence in the media sphere. Here are the reasons why you should consider Bookadsnow to book newspaper ads online the Hindu publication.

Strong relation with every Media Houses: Bookadsnow has a long-standing relationship with the Hindu, which is not found with other media planning organizations.

In-house Media Planning Team: We have a sharp and proficient in-house media planning team who will guide you in the journey of booking and be publishing obituary ads.

INS Accreditation:  Bookadsnow is recognized by Indian Newspaper Society or INS which adds to the value of the brand name.

Complete Transparency and Negotiable Media Rates: We at Bookadsnow believe in maintaining a transparency with our clients to avoid any confusion. After you tie up with Bookadsnow for releasing newspaper advertisement, they will provide you a hard copy of the newspaper to see the published Ad. Moreover, we have the potential to negotiate the Ad rates with the renowned media house like the Hindu on behalf of our clients which is why we do not possess a pre-defined card rate.

For further information, you can browse through the official website of Bookadsnow or get in touch with them @ 9830400021 or info@bookadsnow.com