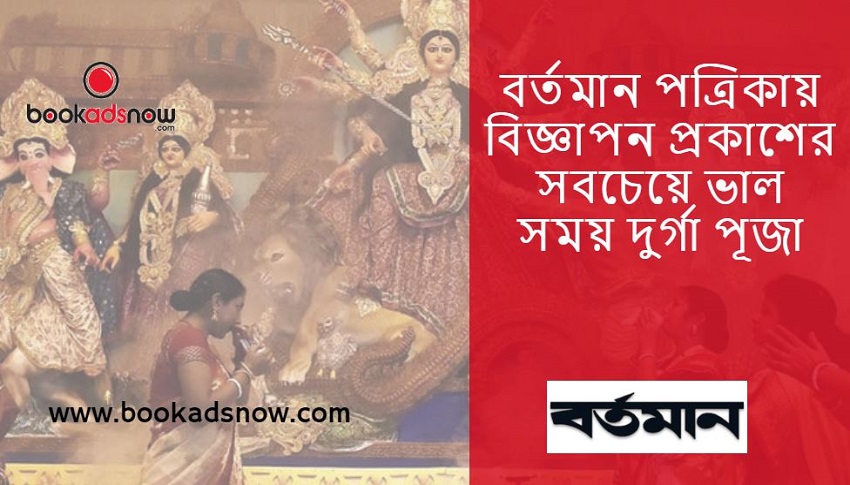 It is that time of the year when the 'City of Joy' is getting its yearly makeover to welcome Maa Durga with pomp and grandiosity. It's not just the city lanes that get dressed up with beautiful lights and unique pandals but also the city dwellers who don the best pieces of clothing to enjoy the quintessential flavor of the festival. Thus, the essence of the festival is best felt in Kolkata where the preparations begin nearly a month before.

Hence, the magnificence of the festival compels the advertisers to come up with the best advertisement in the newspaper as during this season the newspapers get flooded with Ads. Moreover, advertisement in the newspaper during this season should be designed meticulously as a small mistake will instantly create a feeling of repulsion among the viewers, thereby affecting the final action of purchasing. It also calls for precisely choosing the right publication that experiences a healthy circulation and readership.

Hence, which is the Best Publication to tap on?

Furthermore, the presence of supplements like Chatusparni and Rabibar gives yet another spot for the advertisers to publish Bartaman Patrika advertisement, whose importance otherwise might get lost in the main issue. Hence, the enormity of the publication gives every reason to the businessmen to publish an advertisement in Bartaman, especially if the advertisers are looking to target the individuals of Bengal during Durga Puja. However, the rush during Durga Puja is unmanageable which calls for publishing advertisements in the newspaper in a short span of time. However, is that even possible?

With Bookadsnow, consider the Issue to be Sorted!

Owing to our 30+ years of existence in the media sphere backed up by the INS (Indian Newspaper Society) accreditation, Bookadsnow has a strong relationship with numerous media houses across the nation. This feature gives us the power to negotiate the Ad rates with the concerned publication on behalf of our clients rather than maintaining a predefined card rate, thereby making it possible for us to provide the best newspaper advertising rates.

Moreover, we have given a new definition to newspaper advertising. With us, advertisers can book Bartaman Patrika advertisement in a few simple steps from their comfort zone. Our in-house skilled media experts also guide our clients at every level to book newspaper Ad, thereby enabling them to publish Ads with better visual effects to create solid engagement with the readers. For Durga Puja purposes, we can also provide you with readymade Ad templates that will provide you with a better ROI.

Lastly, we provide our clients with a hard copy of the newspaper to see the published Ad and to make it act as proof of our agreement. For further information catering to booking Bartaman Patrika advertisement, drop us a mail @ info@bookadsnow.com or connect with our experts @ 9830400021 to book an advertisement in the newspaper at a cost-effective rate.