2021 Witnesses a Resurgence in Print Advertising 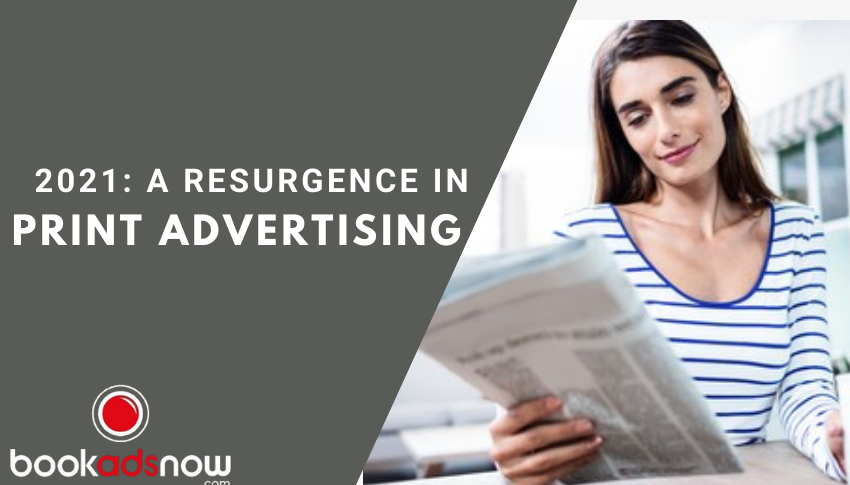 While most fell under the impression that digital dominated the pandemic, it was quite a favourable time for print media. A survey  found that time spent reading newspapers increased, especially among those in the 41-50 age bucket. Some of the reasons for this are as follows:

The same survey also revealed that consumers paid higher attention to newspaper advertisements. Surprisingly, only 10% of them skipped them. Reinforcing the trust of the print medium, it revealed it's key role in terms of influencing brand perception as well.

Data from TAM Adex in July suggests that ad space per publication increased by 36% over the span of a year. Adex data also reveals the top 5 advertising categories in print which occupied almost 30% of the overall share of ad space: multiple courses, cars, hospitals, two-wheelers and real estate.

For instance, print drove brand awareness of nearly 55% for consumers intending to buy their first car. Newspaper ads proved to be the most effective medium here for repeat buyers as well. Furthermore, it is most preferred for categories such as smartphones, finance and education.

“In a digital world, when you have a plethora of choices, credibility and trust become two very important pillars for any selection. And print has time and again proved its credibility because of the rigour and systems of checks that are in place.”

This does not come as a surprise when you see digital giants running print advertising campaigns in order to establish trust and credibility. Even today, the strength and influence of newspaper advertisements are undisputed despite the conditions that prevail.

A few leading newspapers state that August 2021 was quite profitable in terms of circulation and ad revenue. The pandemic had instilled fear into several publishers (a few who then sought to direct their efforts in web traffic). But the 2nd half of 2021 has seen a resurgence in the print advertising . Brands across the spectrum have taken the stage and there has been an increase in ad spends in July (as seen from industry experts).

Here’s what Shashi Sinha, CEO of IPG Mediabrands India, had to say:

“There has been a jump in advertising in print media starting July and I think the festive season will be much better. Yes, people are cautious with the expected third wave, but there are enough and more advertisers who believe in the power of print.”

“Print advertisement has always been the barometer for the resurgence of the economy. While the first quarter of fiscal 2021-22 has undoubtedly been challenging due to the Covid-19 second wave, the performance of print in July ’21 gives rise to a huge sense of optimism.”

As conditions pave the way for normalcy, print media continues its role as a highly trusted source of information. But more importantly, it's role as an effective platform for brands and marketers. In depth coverage of regions, shorter lead time - there are many aspects that drive the print sector. As rightly pointed out by a senior marketer, advertisers have started heavily advertising in newspaper advertisements due to their ability to create a ‘positive momentum’ that no other medium comes close to. Since it is indeed the need of the hour, “there is nothing that can create euphoria better than print.”

And to make your advertising ventures worthwhile, we at Bookadsnow are here to help.

Get in touch to explore the best ways to make newspaper advertising work for you!