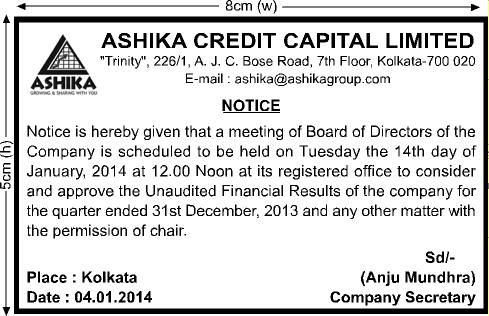 What are the kinds of Public Notice Ads booked in Daily Milap?

• Property Notice: Property Notice Ads in Daily Milap is booked to inform the concerned people about the latest deals regarding a particular property so as to avoid future disputes.

• Company Notice: A Company may publish a Public Notice Ad in Daily Milap to ensure a change in the office location.

• Court Notice: A Court Notice advertisement is published in Daily Milap to inform the public at large about the legal proceedings of a court.

• Merger Notice: A Merger Notice ad is published in the Daily Milap to announce to the public when two companies unify into an organisation.

• RBI Notice: Reserve Bank of India publishes the Notice Advertisement in Daily Milap to inform the public about the changes in laws and implication of new rules and regulations.

What are the formats for publishing Public Notice Ads or Legal Notice Advertisement in Daily Milap?

Based on the format, Public Notice Ads or Legal Notice Advertisement in Daily Milap are of three major types:

• Text Classifieds: Text Classifieds are text-based advertisements. They are simple, run on line ads and are charged on the basis of the number of lines utilized in the content.

• Full-Scale Display: Full-Scale Display includes image and text with the main focus on the centre image. In comparison to the other two formats listed above, the size of the advertisement is bigger and costlier.

The perks of booking Public Notice Ads in Daily Milap with Bookadsnow are as follows:

• Competitive rates: We provide you with feasible or the lowest quotes that are available in the market.

• Complete transparency with the media buying: We endeavour to do away with the lack of transparency prevalent in the market. Due to this reason, we desist from show casing the card rates online. This is because the media ad rates are highly negotiable.

• End to end media consultancy: Our dedicated media team make it a point to guide you through your media plan or Daily Milap Notice Ad Booking process from start to finish.

• Readymade formats and templates: We understand the problem faced by the first time ad bookers. Therefore, to make their experience relatively easy, we assist them with ready-made templates for their Daily Milap Notice Ad Booking

• Flexibility regarding last minute booking of Public Notice Ads: We understand your need of the hour and allow you to place last minute advert booking.